The 2012 Minnesota State Open Singles relocated to the LifeTime Fitness Club in St. Louis Park while the U of M undergoes remodeling.  The club is a great facility but some folks got lost trying to find the viewing gallery with the split court area.  The tournament committee did an outstanding job, again, running a first class event.  The 2012 annual MSHA membership meeting was held during the tournament and Steve Tamminga, Mike Kloos and Matt Johnson were re-elected to the MSHA board for new three-year terms.  The Secretary and Treasurer provided short reports to the 50 people gathered and 2013 tournament formats (including a plan to hold the Masters Doubles in Mankato) were discussed.  Upcoming events were noted and several discussion items were addressed.

The question this year was: could anyone really challenge Andy Nett for the State Open Singles Championship?  Or would he repeat in 2012?  Ranked ninth in the country, Andy demonstrated a new level of play not seen in Minnesota for a few years.  No one scored more than six points on Andy as he demolished all challengers.  Nett easily handled an up-and-coming Brian Burke who also beat a strengthening Mat Langhorst.  Pete Crouser had a little tougher go of it with a tough first match against Tim Kappes followed by an even tougher opponent in Mike Gustafson.  Neither of these put a serious dent in Pete’s armor.  But Nett never let Crouser get anything going in the finals – game, set, match!  Mat Langhorst defeated John Stoffel for the consolation honors and Brian Burke had an entertaining match with Mike Gustafson for the third place trophy.

The A division offered some of the best matches in the tournament – each one of the Friday first round matches were hotly contended and each went to a tie-breaker (the tournament committee went crazy with the scheduling headaches!)  Overall, almost half of the matches in the A division were decided by tie-breakers.  Tyler Stoffel broke through from his number 3 seed to take the trophy and advance to the Open division (look out Dad – you may have to move to your age bracket!)  Clearly a force to contend with in the coming years, Tyler now has some of the strength to go with his solid technique.  Even a seasoned Steve Tamminga could only provide a little competition in the finals, scoring the most points of any contender but not enough to defeat Stoffel.  Daniel Van Aartsen had a great tournament claiming third place and Dane Swanson showed great progress to claim the consolation title.  It wasn’t the finals, but the younger David Miller finally defeated older brother Michael with a thrilling roll-out to end a tie-breaker in the consolation semi-finals.  The entire field should be very proud of their play – it was great to watch all the new talent blossoming in Minnesota, undoubtedly the result of the great collegiate programs at the U of M and Mankato State.

Many of the players from last year moved up to the A’s leaving the door open for Steve Letourneau in the B Division. He seized the opportunity and captured the title coming from the sixth seed even defeating the second seed, Matt Johnson in a tough battle in the semis.  Drew Christensen proved a worthy opponent but could not find enough defense to get ahead of Letourneau.  Matt Johnson repeated for third place with a tough win over an improving Jesus Cordero.  Tom Pearson took home the consolation trophy.

Some say Lee Johnson (from Iowa) should have been in the B division as he was way to strong for several pretty good players in the C Division.  But then David Abramson did the same thing in the lower half of the draw including playing in a preliminary round.  The finals were set and the two players had a great match.  Lee came out on top - both he and Abramson look ready for the B’s.  Kara Smith had a very tense match with Matt Job to win the third place title with an 11-10 tie-breaker win.  The consolation bracket was extremely competitive with both semi-finals going to tie-breakers.  John Johnson won his at 11-8 and Josh Klaseus won his at 11-10 setting up the coni final.  Johnson had more left in the tank and took the honors.

The Golden Masters (50+) A division was loaded with good players.  Jay Spooner (from Fargo) played great, defeating last year’s champ Tim Fichtel in the semis and a great looking Hank Ulrich in the finals.  It may be that  Brett Broxey took a little too much out of Hank in the toe-breaker semi final.  Brett went on to defeat Fichtel for third place getting revenge for the previous year’s finals loss.  Phil Kleineschay defeated Mike Black for consolation honors.  Great play from the guys with 50+ years under their belt!

The Super Masters (60+) division brought a few more new faces again this year as the baby boomers crossed into the magic 60’s.  Still, no one could defeat the real master John Nett. It looked like John Miller wouldn’t even put up much of fight but he got hot taking a lead in the second game. But Nett just kept him off-balance enough to pull out the win. Greg Taylor was happy about defeating Mike McQuillan (he thinks it is the first time ever) in the early rounds and went on to take third after getting trounced by Miller in the semis. Brian Mahaffy survived to get the consolation prize.

It seems like Gary Rohrer is always in the hunt – from his very first junior titles more than 50 years ago to another win in the 70+ bracket.  There were some tough challenges but in the end Gary hits the ball where most of us can’t hit back and he took home the Diamond Masters title.  He looks pretty good with two replacement hips – hey, doesn’t that disqualify him from this bracket?  His hips are only a few years old!  John Peterson joined the 70’s this year and took home third place with a pretty good showing.  Jim Noren still has it and took home the consolation trophy. 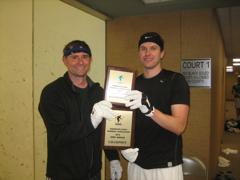