The State Open Singles Champ-ionship returned to the U of M for 2013 and in spite of the wintery weather that has plagued Minnesota this spring, the play inside was hot.  Throughout the tournament, the buzz was for the much anticipated Andy Nett and Matt Hiber showdown and the results didn’t disappoint.  Hiber cruised to the final, allowing his two opponents only 12 total points.  On the other half of the bracket Andy Nett was more methodical in defeating Mike Wells in the quarterfinal before being pushed to 17 and 17 by Brian Burke in the semifinal.

Once Sunday’s final began, Nett flipped a switch and looked every bit his ranking (number 5 on the pro tour).   During the first game, Nett and Hiber looked like a couple of heavyweights feeling one another out as the game remained within a point or two for the first 20 minutes. With the first game at 12 – 12, Nett went on a 5 point run and looked to be in control.  However, after a short time out, Hiber was able to steady himself and bring the match back to 17-15 before Nett pulled away to win 21-16.

During the second game the pace quickened even further.  Both players made the spectacular look routine.  On one memorable rally that left even the combatants saying “wow,” Nett had 3 diving gets, 2 off the front wall and one off of the back, before Hiber rolled a kill to end the rally.  In the end though, Nett’s power proved to be too much as he found a late run to finish Hiber at 9, a score that was not indicative of how closely this match was contested. 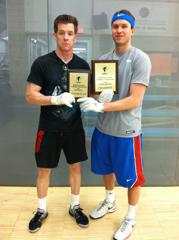 Although the Open division was the talk of the tournament, there were several highlights in other divisions.  An A Division semifinal match between Dane Swanson and Nick Olson drew a rauckus crowd as their match went to an 11-9 tiebreak and concluded with Swanson hitting a diving kill shot from 32 feet back.  David Miller got the best of Swanson in the finals. 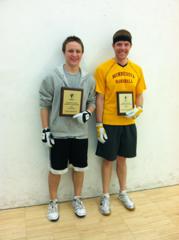 Equally exciting was the C final that featured Kristina Rude defeating Joe Cox 19 and 20 in a marathon match that saw six game-point side-outs during its final stanza. 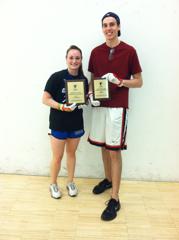 In the Novice division, Neal Kunik, with only 10 weeks of experience, wowed onlookers with a strong right and left that made people wonder if he wasn’t already ready for the B Division.

Meanwhile, in the B Division, Ma Vang cruised to the title with his strong right and willingness to kill the ball from anywhere on the court. 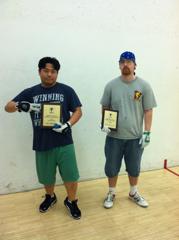 The masters divisions also featured some exciting handball with Gary Rohrer and John Nett continuing their strangleholds on their respective divisions and Brett Broxey taking home the Golden Masters crown. 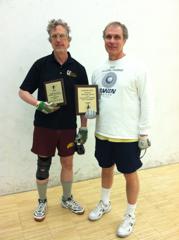 Brian Mahaffy looses to John Nett in the Super Masters 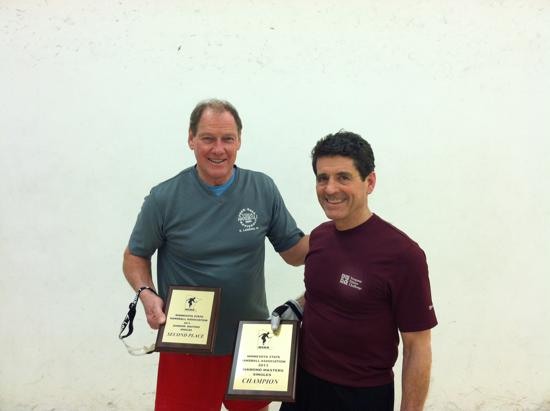 A new addition to this year’s tournament was the Youth Two Bounce division which featured ten 6-12 year olds playing in their first handball tournament.  This division was the brainchild of Mitchell Lallier who promoted and ran the new division. 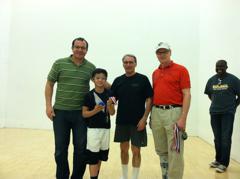