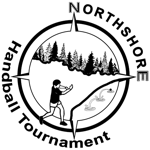 One decade ago, handball communities in Duluth and far beyond lost a great friend and legend in Alva Rankin. Since it began in 2019, the Northshore Handball Tournament has sought to honor his greatness with the Alva Rankin Memorial Cup, a vision of the deceased's very close friend Chris Foley. Unfortunately Foley passed away last year, unable to see the tribute come to fruition, but thanks to his initiation it finally has. Crafted with high-quality cherry wood, emblazoned with Northland imagery, and engraved with the names of our champions, this piece of art adds immediate prestige and sentimentality to the competition. Thanks are lifted up to Alva and Chris for their inspiration.

2022 was the first year to feature players from North Dakota, and Illinois was again represented with the return of 2021 champion Ray Ure.

On Saturday, Mat Langhorst (Duluth) and Erling Holdahl (White Bear Lake), leaders as Northshore entrants respectively at four and three years each, advanced to the consolation championship. They battled a very competitive match with Langhorst’s strong left-handed game overcoming the ceiling shots and cut-off volleys of Holdahl, who is much more comfortable on a 1-wall court than in the cubicle that is 4-wall. Final score: 21-11, 21-14.

In the semifinals, Pesch and Burke met as they did in 2021 when Burke very nearly posted an odds-way-off victory. Pesch's path to the final this year would be simpler but almost as precarious, cruising through the first game but trailing 17-8 in the second before stalling his opponent out the rest of the way (21-5, 21-19). In the other semifinal, Ure, facing rare excessive-but-controlled power in Sandy, always kept rallies competitive but came up short more than not. Sandy steadily maintained a half step ahead, ensuring a new champion would soon be crowned with a 21-13, 21-13 upset.

In the 3rd place match, the precision play of a fatigued Burke was no match for the talent and peak condition of Ure. Ure for third: 21-12, 21-10.

Matches seemed to zip right by as there weren't any tiebreakers. Little did anyone suspect the trend would change when Pesch - last year's runner-up, current title holder at the Maverick and Tallcorn opens, determined to add a ring to his collection ... - laid a quick 21-3 claim on game 1. With Ure taken out of his path and just one game away, Pesch's destiny as champion seemed all but confirmed, but Sandy was not demoralized. Rather, he was determined to show that he is a force to be reckoned with, bringing more power, wasting no opportunities, and flipping the score of the second game, 21-7. Pesch's own response in the tiebreaker provided plenty of action for spectators to savor, but it would not be enough to defer the rise of North Dakota's star to another place and time. Sandy with the break-out victory: 3-21, 21-7, 11-6.

The awards banquet followed at Dubh Linn Irish Brew Pub with players and guests in attendance. Awards included prize money and woodcraft medallions for the top 5 finishers. Soon a new engraving plate with Luke Sandy's name will be added to the Alva Rankin Memorial Cup.

Some interesting trends are emerging after four years of the Northshore Handball Tournament:

The event is maintaining steam, and local media continue to take notice:

Thanks go out to all who were able to help this year. Specifically lodging host Alva Djerf, who had a hand in bringing the Rankin Cup to fruition, prepared a couple large meals and always kept herself available as a resource. The public engagement and refereeing expertise of Tom Ure were also welcome enhancements to the event.

For more, including video footage, check out the Discussion tab on the Facebook event page: facebook.com/events/1056348978650543. 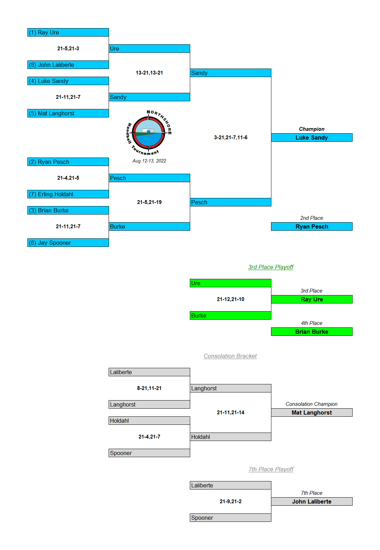 See how this tournament impacted the Elite Series rankings.

See a montage of the Rankin Cup's creation