Being an event small enough to be held during a virus pandemic wouldn't be quite enough for the Northshore this year. It would also need to be fortunate enough to have George Langhorst as a director. Few others besides him would have ever known that recent restrictions on the Northland's public 4-wall venues wouldn't necessarily preclude the second annual edition. Not far from his home in Moose Lake was a private facility he had played in decades ago. He knocked on the front door, introduced himself to the current occupants, and unlocked Minnesota handball's newest treasure.

It's called Metanoia Place. Located on over 100 acres of scenic wilderness (including a beautiful large pond just outside the window) and capable of hosting dozens of visitors, it is being developed as a retreat center for missionary workers, replete with amenities for relaxation and recreation. Among those amenities: a handball court built into the central lodge. Thanks to the generosity of owners Doug and Polly Bumgardner, our community has been introduced to this veritable slice of Handball Valhalla. Indeed, they look forward to being a regular destination on our event calendars.

To keep the gathering small and allow timely progress of the competition, the Northshore would once again be limited to eight players, featuring six returners. Friday's matches saw all high seeds advance, setting up defending champion Dave Schiller (Minneapolis) against newcomer Quinn Foley (Woodbury) and Mat Langhorst (St. Paul) against Donovan Foley (Mounds View) in the Saturday morning semi-finals. Quinn Foley, thanks only to surviving a first-round tiebreaker against veteran Jim Grota (Rochester, age 54), would prove his mettle with a 21-11, 21-14 win, preventing Schiller a shot at a repeat. In the other semifinal, Langhorst advanced decidedly over Donovan Foley 21-6, 21-10.

Saturday afternoon's consolation finalists Grota and Ricky Ness (Bloomington) agreed to start their match early, leading to one of the most opportune mishaps a handballer could ever witness. With one fateful warm-up throw to the ceiling, Grota would dislodge the cage protecting one of the lights, rendering the court unplayable. The solution was clear, though, as once again the Northshore would benefit from the presence of George Langhorst, who had access to the necessary equipment. Half the tournament's attendance was immediately deployed. Retrieving scaffolding from a couple miles away, erecting it in the court, making the repair (even preemptively reinforcing one other cage), clearing the court for play...All of this barely took an hour, and the consolation final would start exactly at the time it was scheduled. Grota would be crowned consolation champion with a well-earned 21-15, 21-16 win.

In the third place match - which naturally started on time; thanks Grota! - Schiller would obtain his second Northshore victory over 2019 semi-final rival Donovan Foley. Final: 21-13, 21-15.

In the championship, Mat Langhorst, seeking better fortune in his second straight chance at the title, looked very strong taking the first game 21-13. Quinn Foley figured his opponent out, though, and Langhorst couldn't gain any traction for the remainder of the match. With intelligent and focused play, Foley cruised to a final score of 13-21, 21-4, 11-0.

Everyone in the tournament is very grateful that the event was able to proceed in 2020 and very impressed with the Bumgardners' generous hospitality. (Although, Mat Langhorst may be wondering if he ate too many freshly baked cookies before the championship.) Special thanks also go to participant Henry Arneson for bringing the equipment and knowledge necessary to live-stream most of the tournament's action, including scenes of the light repair described above. This footage, as well as complete results, may be found at the event's Facebook page: https://www.facebook.com/events/2818363441558067/?active_tab=discussion. 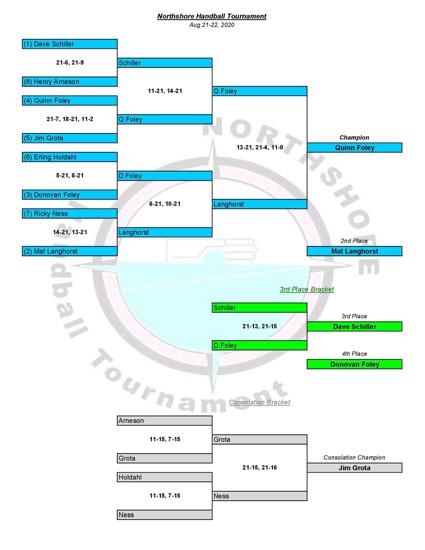